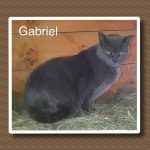 Gabriel is a senior declawed boy whose owner could no longer care for. At that point he was taken to a barn. We were eventually contacted and asked to find him a home out of the barn environment. Once with us Gabriel began to decline after a few weeks. Turns out he is a Diabetic.  Medical intervention followed as he went into a crisis state.  After treatment he stabilized and  we are happy to report he has now been adopted!